Mariner’s ethane is transshipped overseas to be converted into plastics, including single use bottles. Propane and butane also are shipped overseas for a variety of uses.

When the project was first announced in 2014, there was widespread opposition across the Commonwealth based upon both safety and environmental concerns. In addition, Sunoco sought to use the process of eminent domain against private property owners to acquire land it needed. A handful of property owners brought suits to fight eminent domain based on a number of different grounds; all of those suits were ultimately unsuccessful.

Mike Bomstein partnered with Clean Air Council in 2015 to mount a large-scale challenge to the project both on statutory and constitutional grounds. They defeated Sunoco’s motion to dismiss in the Philadelphia Common Pleas Court but on appeal to the state’s Commonwealth Court the lower court was reversed.

In Delaware County, Bomstein worked with the Middletown Coalition for Community Safety (MCCS) as well as local residents to stop the pipeline project. 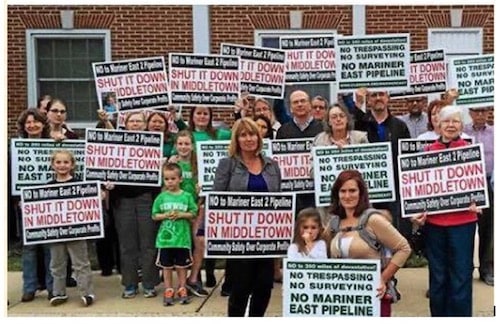 A short video interview with Bomstein recorded by a Scottish publication can be seen on Youtube.

The Middletown pipeline opponents filed two suits in the Delaware County Common Pleas Court. The first was based on the notion that the new construction was being installed too close to residents’ homes, in violation of local ordinances. The second was an effort to stop Middletown Township Council from granting easements to Sunoco. A conservative judge dismissed both cases on the ground that all such matters could only be determined before the state Public Utility Commission (PUC).

In late 2018, residents of Chester and Delaware County took the judge’s suggestion and banded together to file the “Safety 7” case with the PUC.

In their Complaint, the Safety 7 allege that Sunoco has flagrantly violated both federal and state utility safety regulations with respect to proper notice to the public; location of pipelines too close to homes and public places; unsafe and environmentally disastrous construction practices; and the dangerously volatile nature of the products being transported.

Public support for the Safety 7 case has been widespread across the Commonwealth. Opposition to the Mariner East Pipeline Project also has come from a network of individuals and organizations across the state, some of whom also are affiliated with efforts in other parts of the country to stop construction of environmentally destructive pipeline projects. The complainants’ case was bolstered by the intervention of the governments of Chester and Delaware Counties, multiple area school districts and the Clean Air Council.

The Safety 7 trial began with five days of public testimony that took place in Chester County in the fall of 2019. More than twenty citizens and officials testified on the record before a Public Utility Commission (PUC) judge. The trial resumed in September, 2020. Over the course of eleven more days of testimony the judge took evidence from two dozen more witnesses, including fifteen experts hired by Sunoco to support its claim that the pipelines were safe and beneficial to the Commonwealth.

Counsel for the parties have now submitted extensive post-trial briefs to the PUC judge. It is anticipated that it will be several more months before a final PUC decision is rendered and after that it is likely that the losing parties will appeal to the state’s Commonwealth Court for review of the final PUC decision.

For more information on the Safety 7 case and how to support it, please visit the MCCS website.

Contact Us
Practice Areas
Client Reviews
★★★★★
"Michael Bomstein has been our family's attorney for more than 20 years. He has always been very accessible for litigation, real estate and contract issues. Mr. Bomstein is knowledgeable, wise and ethical. I recommend him without reservation." - Karen W.
★★★★★
"I appreciated the time you took to speak with me recently. I felt a lot more comfortable after speaking with you and want you to know that it is greatly appreciated." - B.W.
★★★★★
"When my business partner brought suit against me I needed an experienced attorney to help defend me in court. Mike Bomstein worked with me from start to finish and we got a really good result. My practice is now doing well. I strongly recommend Pinnola and Bomstein." - Shimma A.
View More
Submit a Law Firm Client Review